Our client in Watton had a new Quarry tiled floor laid at her home and all went well until the tiler came to seal the finished floor after grouting. Needless to say, she didn’t get the finish she was expecting and told us that the tiler had admitted that he had no clue how to address the problem and had told her to contact a specialist to do the work and was happy to cover the cost. 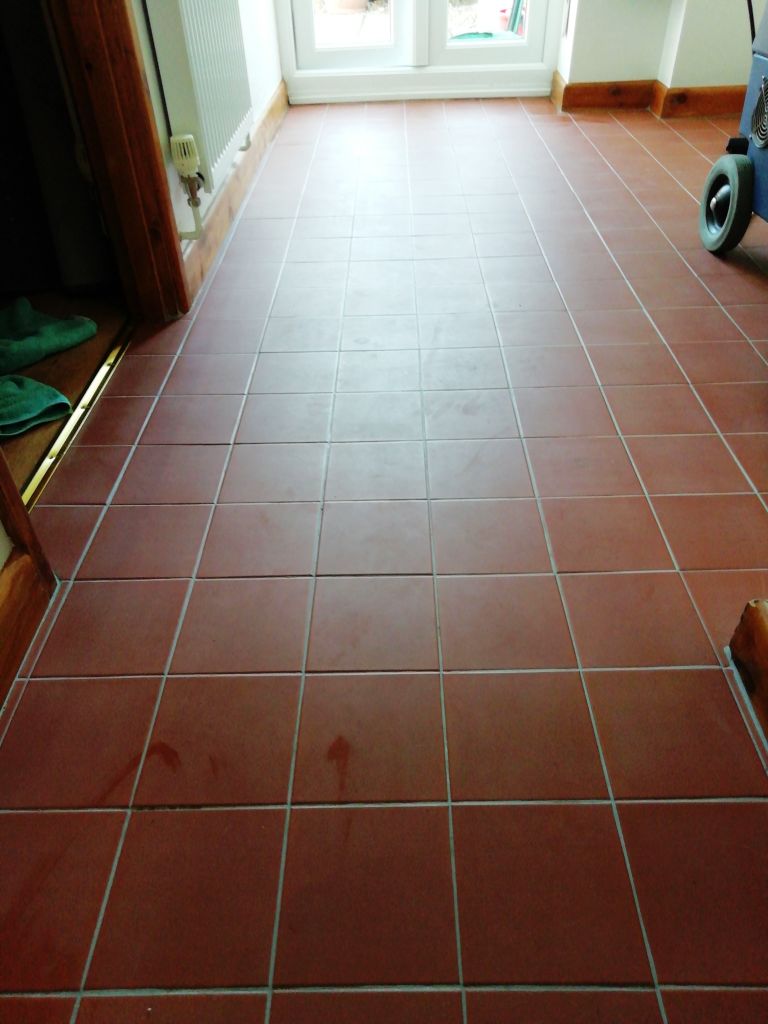 I shouldn’t complain as its Tile Doctor who gets called in to resolve these issues, but there does seem to be a training gap with many tilers having no clear idea how to properly finish a new floor tile installation.

The problem was immediately obvious from the photos she sent over; grout had not been completely polished off the Quarry tile surface leaving a dull haze over the floor. The floor had then been sealed and this had only served to emphasize the slightly grey, dusty and lacklustre appearance of the floor.

Removing Grout Haze from a Quarry Tiled Floor in Watton

To remove the grout haze, it would be necessary to remove the sealer first, so I spent the first part of my visit breaking it down with a powerful 2:1 dilution of Tile Doctor Pro-Clean. The solution was left to soak into the floor for about ten minutes before being scrubbed in using our Klindex rotary machine fitted with a black stripping pad. The resulting slurry was power rinsed and extracted away with our 400psi Ninja machine.

Having done this, we could see that the grout haze was still present in many areas and was becoming very pale and patchy as the tile surface dried out. With the sealer now removed I turned my attention to the removing the grout. This was rectified by applying Tile Doctor Grout Clean-Up and then rinse extracting as before. This left the floor spotlessly clean and would be ready for sealing the next day after being left to dry off overnight with the aid of our industrial dehumidifier.

We returned to Watton on the following day to meet our client and explain the various sealing options available, from no-finish penetrating sealers to high gloss acrylics. After much discussion, we realised that the client had originally expected the finished floor to have a noticeably shinier appearance than the matt finish colour enhancer that the tiler had used but without the glare of a high shine product.

After weighing up the client’s requirement the obvious choice was to use Tile Doctor Seal & Go which is a water-based sealer with a mid-sheen finish which makes daily maintenance much easier and more effective. We applied this sealer in five thin coats by hand using microfibre cloths, allowing 30 minutes drying time between each coat. 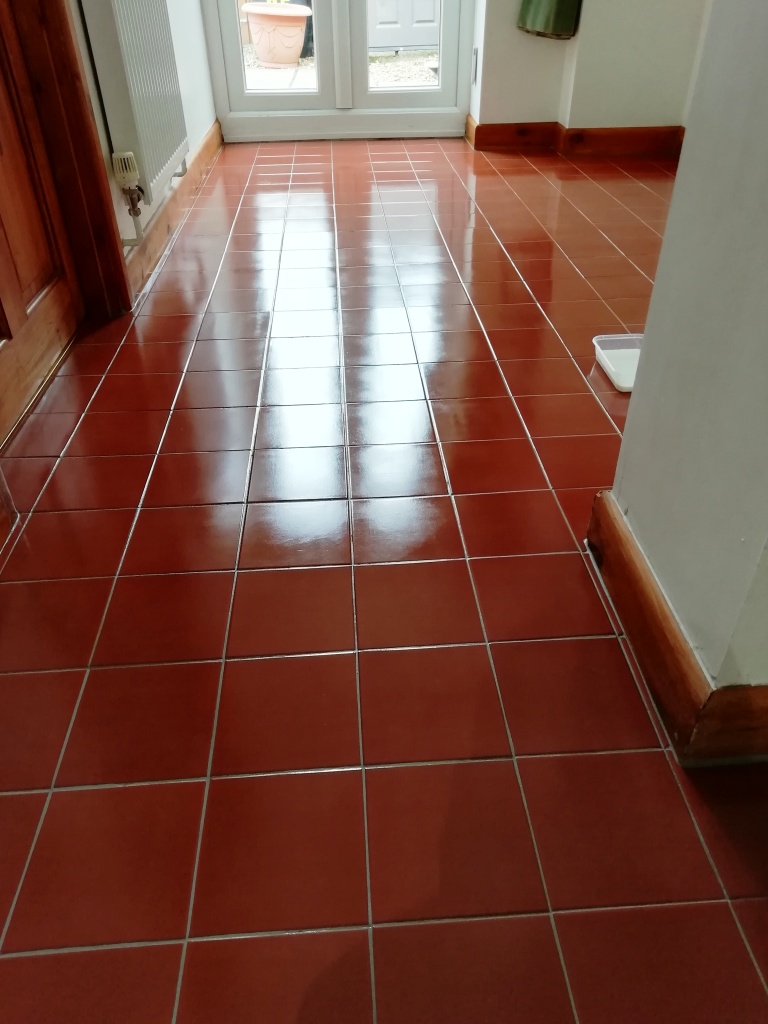 The client was absolutely delighted with the result we achieved and said that it was exactly the way she had expected the floor to look when they originally chose the tiles.

Finishing a Quarry Tiled Hallway after Installation in Norfolk

Tucked away on a back street in Geldeston about a mile away from Gillingham, Norfolk is the newly-restored former Garden House pub which has been converted into a two-bedroom private residence by the new owners. Everything had been renovated to the highest possible standard using local craftsmen and top-quality materials. The last piece of this jigsaw was the renovation of the quarry tile flooring which was laid in a brick pattern and runs from the kitchen through the dining room and into the main entrance hall.

As is often the case during major building works, the floor had been inadequately protected and consequently it had become completely coated in a combination of builder’s dust, plaster, paint and mud from the garden. As it’s such a large area it really needed some attention to get back its lustre. 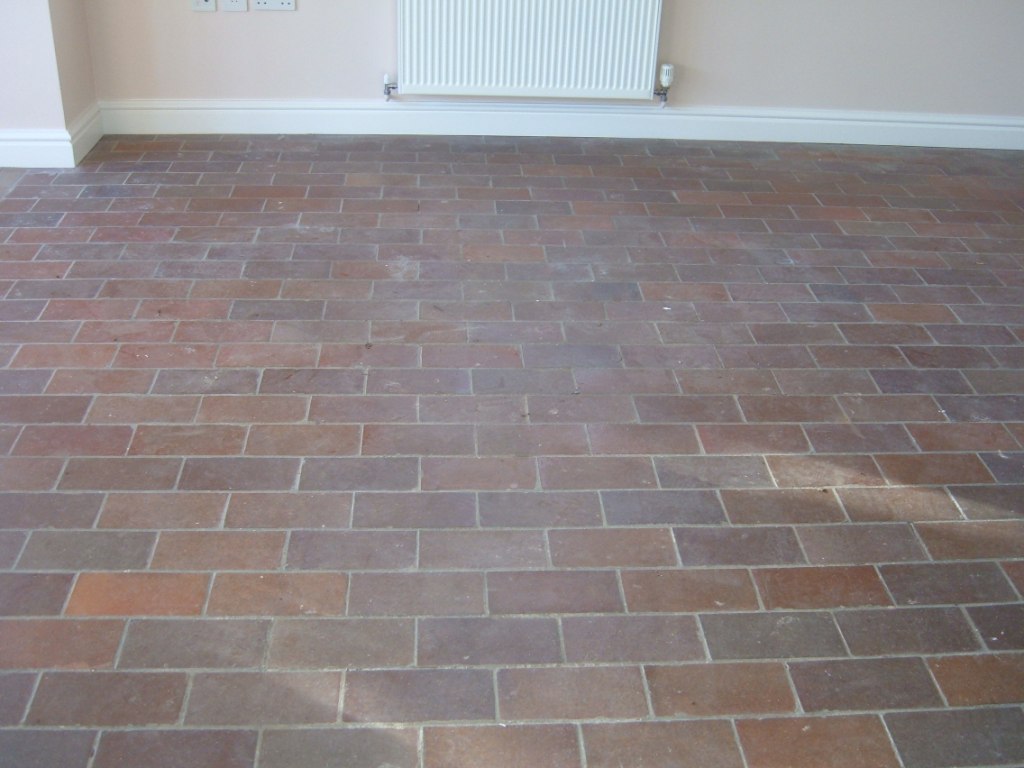 In order to prevent further scratching to the tile surface during the cleaning process our first job was to vacuum the whole area to pick up all the larger bits of debris and grit. Next, the floor was deep-cleaned using a rotary machine fitted with a black scrubbing pad and a strong solution (1:3 ratio) of Tile Doctor Pro-Clean, our high pH combination stripper and cleaner which made short work of the top layer of dust and grime.

Having power rinsed and vacuumed away the resulting slurry, we found that there were a large number of ground-in plaster spots and patches still remaining, which gave the floor an unsatisfactory white spotted appearance. These were removed using Tile Doctor Grout Clean-Up applied with a 6-inch black scrubbing pad fitted to our hand held DeWalt buffing machine, one of the most useful bits of kit in our tool bag! Great for attacking stubborn areas individually. The whole area was then allowed to dry with assistance from two industrial air movers.

Returning a few days later, I checked the moisture levels in the floor which were satisfactory, so we were ready to move on to the finishing stage. My original intention had been to seal the grout lines alone with Tile Doctor Ultra-Seal, our no-sheen solvent based penetrating sealer, assuming that the tile surface was in a reasonably good condition. Unfortunately, owing to the age of the floor along with the abuse it had suffered during the building works, I found that the floor had a tired, pale look to it when completely dry. I decided, therefore, to seal and refinish it with four coats of Tile Doctor Seal & Go which both deepened and emphasized the colours within each individual tile and gave a pleasing mid-sheen to the whole area. 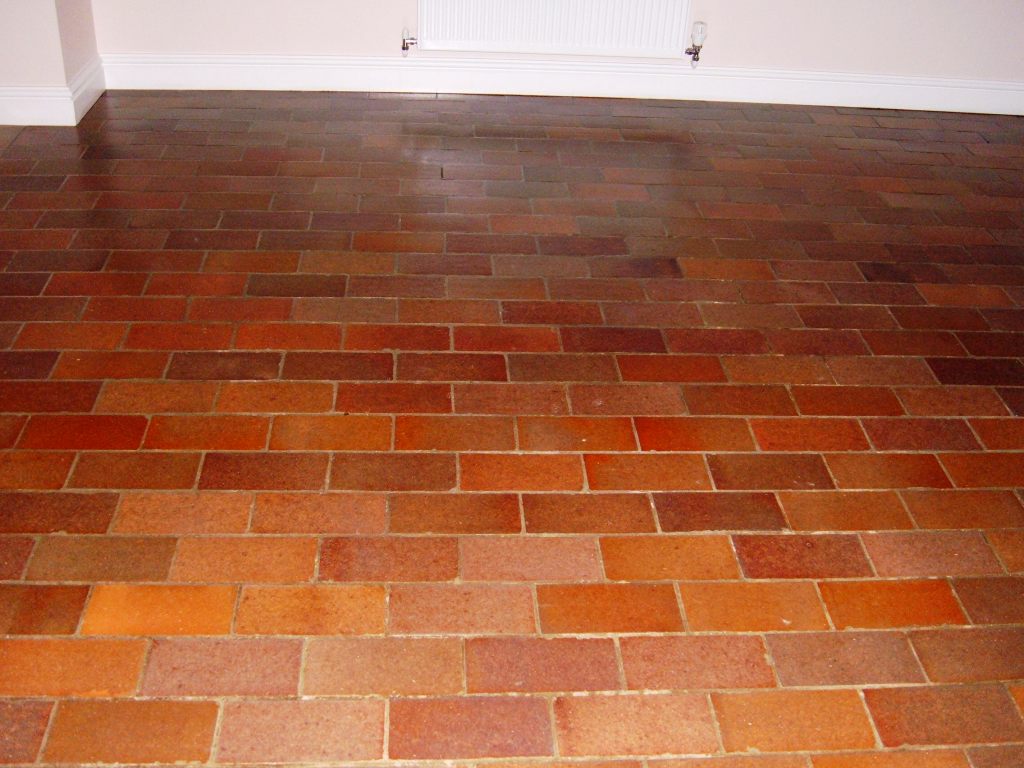 On completion of the job, our client said three words we love to hear… “It looks GREAT!”
It is lovely to have another satisfied client and great to add the finishing touches to their renovation. 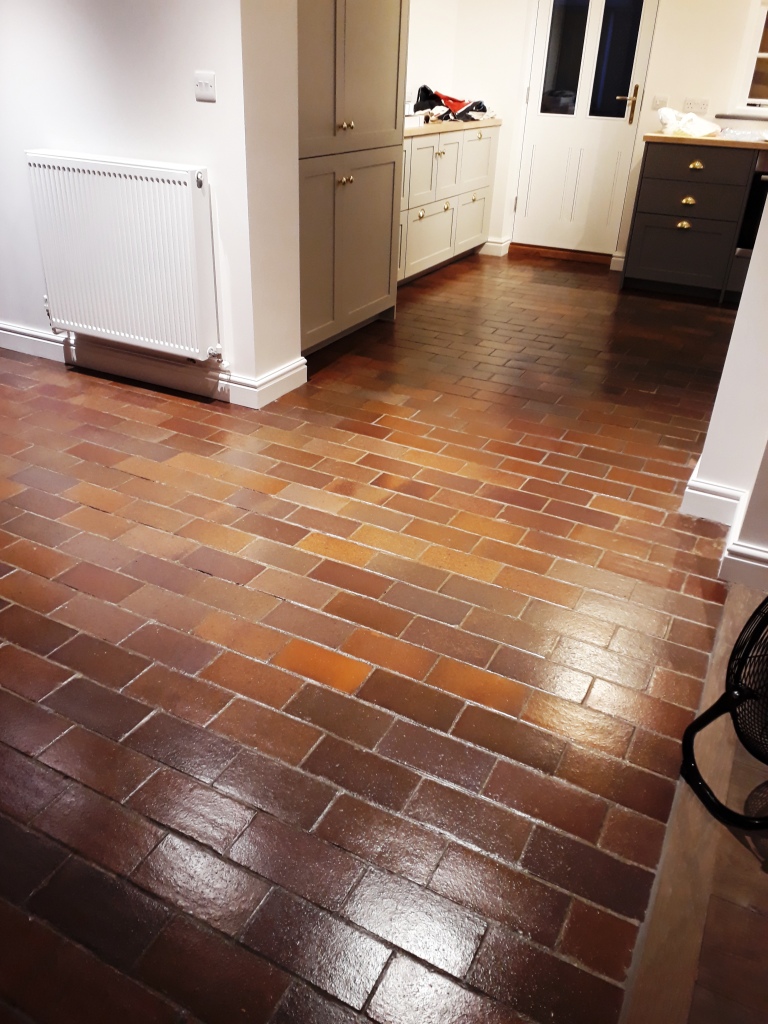 Professional Restoration of a Quarry Tiled Kitchen in Norfolk 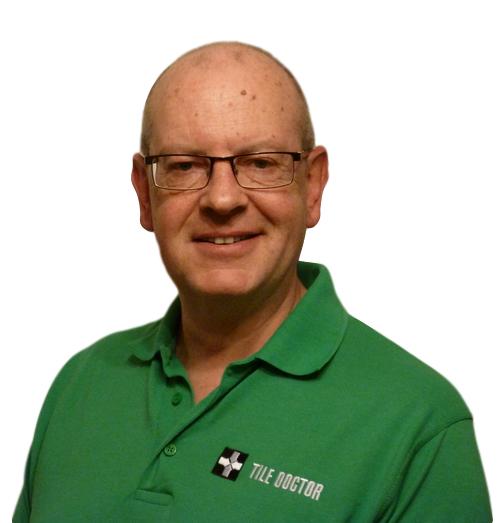